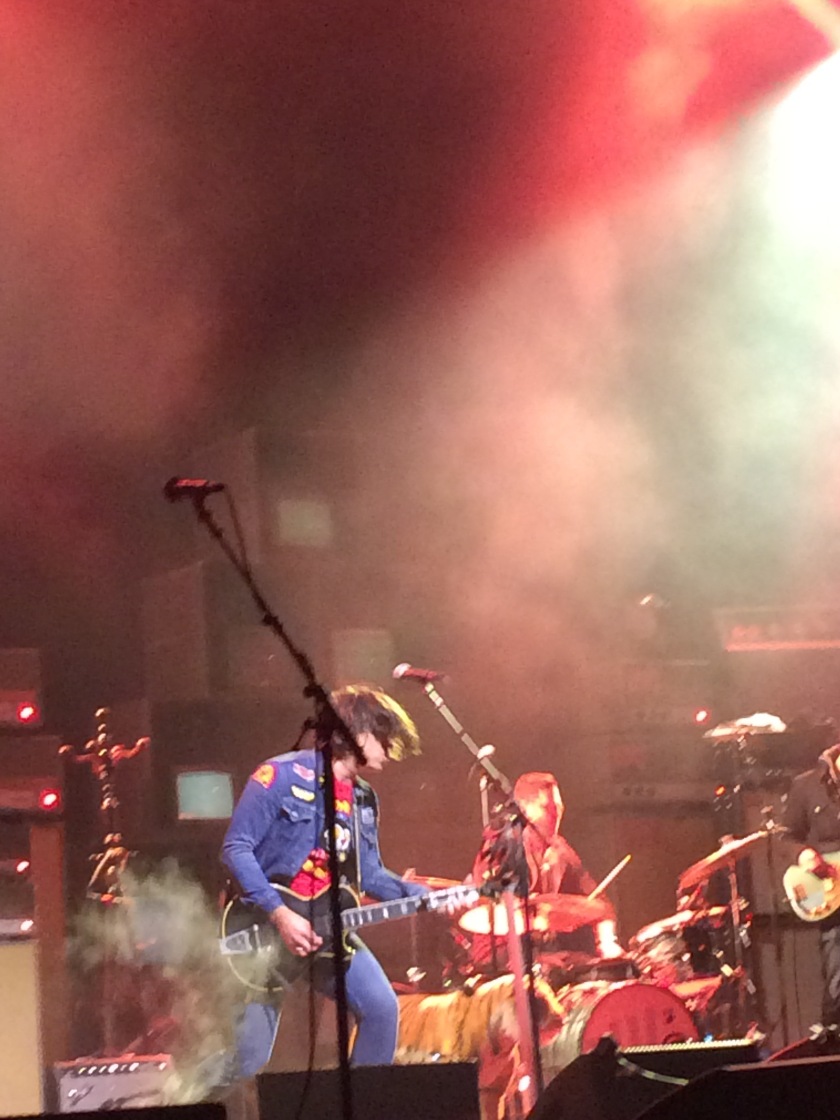 Certain things are guaranteed to happen when I go to a rock show, well, at least a show that involves being a fan of the artist for the past 12 years, identifying with the songs that bring back the memories of growing up in my twenties. You see when I go to a show I sing every word and pump my fist in the air while trying not to spill my drink on someone standing in front of me. I mean last time the beer was overflowing and everyone else was drunk too, and besides, people were pushing into me when the show started, so that one doesn’t count! At some point during the show Ryan plays an older tune like “Sweet Illusions”, a rocked-out version to be specific, and it makes me so damn happy that I jump up and down until I’m nearly out of breath. These are the shows I love.

On Friday May 12, amongst a heavy downpour, me and my great friend Dustin, an avid Ryan Adams fan and awesome photographer, (we’ve seen many shows and trashed a lot of hotel rooms while eating nachos and cheese) arrived at the Merriweather Pavilion in Columbia Maryland. I had noticed the same scene from when I was last there six years ago for the now defunct Free Fest. The open dirt and gravel filled parking lot surrounded by trees made my heart pound because I hadn’t been here in forever and I wanted to run through the gates and yell yes, yes, I’m back baby! I walked through the small path alongside eager rock fans and a up a small hill leading to the main gates. The sky was overcast and the air was cold. I got a beer and checked out the merch booth which stood near the lawn. The venue seats around 10,000. After having a few beers I’m feeling great and ready to sing my heart out. I look around the crowd and realize that I’m one of the youngest people here. A guy with a long beard and glasses stands in front of me. His girl is wearing glasses and a sweater. This is NPR land and yes everyone will be quiet and reserved when the show begins. Nothing against that, but I like to stand up and be one with the show. Sorry but I bought a ticket to rock and dance, not sit there like I’m in my living room. Ok, I know, enough of that rant.

The important thing is the actual show, in which Ryan rocked out twenty-five amazingly great jams that left the crowd burning for more. Not to mention the opening act was Jenny Lewis! Ok, let’s just talk about this right now. I’ve been a fan of Jenny since her early days when she fronted the California based band Rilo Kiley. Jenny quickly became the cool California girl with long red hair and a voice that was sweeter than the wine vineyards in Napa. In 2009 I saw her perform songs from her debut solo album Rabbit Fur Coat, but I hadn’t seen her since. She came walking out in a long white and black suit wearing a black hat. Being in the third row I cheered loud and held my beer in the air. I’m confident in saying that I yelled “Jenny!” the loudest. Soon the guitars in her band rang loud to the opening chords of “Just one of the Guys”, a single from her most recent successful album “Voyager”. Jenny walked to the front of the stage, holding the mic in her hands, closing her eyes and looking down at the crowd. Her voice echoed through the speakers and it’s like an angel singing. Following the upbeat tune was “You are what you Love” from “Rabbit Fur Coat”. Yeah this song is slower but that didn’t stop me from throwing my fist in the air and shouting along with the chorus. At this point the rows of seats behind me were filled. You could see the lawn feeling up despite the rain pouring down.

A surprise moment in the show occurred when Jenny introduced a new song “Keep Dreaming”. A slow melodic tune set to Jenny’s irresistible vocals proved to be a jam with a lot of potential. Let’s hope it makes the cut on the new record. So another surprise moment came when Ryan walked out onto the stage and joined Jenny for the song “Wasted Youth”. Ryan played guitar behind Jenny while she belted out the rock tune. Yeah it was very cool indeed.  The set ended with “With Arms Outstretched”, a classic acoustic sing along the campfire Rilo Kiley gem. The crowd sat in unison and yeah, I got the chills. This music goes back more than a decade ago and can be sentimental. Ah my early twenties. Sometimes you need to hear those again in concert for them to really hit you. Man, it’s inspiring. Jenny thanked the crowd as I stood up on my chair. Yeah I didn’t even care. When Jenny says thanks you stand the fuck up your chair, at least I did. A few seconds later security kindly told me to sit back down in which I obeyed. I wasn’t going to ruin the rest of the show for myself and everyone else.

Up next was Ryan Adams, whom I’ve seen eight times before. Most recently being in Pittsburgh last summer at Stage AE. This time he was promoting his new album “Prisoner”. The album features harmonica, ghostly alluring ballads and rocked out jams. Ryan walked out onto the stage dressed in his normal attire of blue jeans and a jean jacket along with black sunglasses. The look goes with his new music releases that harken the mid-eighties rock power chords. His brown hair is long and falls over his eyes. Ryan opened with “Do you still love me?” which features a piercing guitar solo and B3 organ set to a drum beat that had everyone out of their seats. Yes, I was really happy that everyone stood up because I was not going to watch the show sitting down. Um no way. I also noticed a group of guys who looked to be in college standing a few rows behind me. As they held their beer cups in the air they shouted out the lyrics. Upon looking around I noticed Ryan’s onstage set had a new addition, aside from the arcade and pinball machines, there was now a small mountain of mini TV’s on the sides of the stage with static playing on the screen. The band was different too. Not a surprise, Ryan changes his lineup faster than he writes new songs. The set included older classics from “Two” to the jammed out “Magnolia Mountain”. At one point Ryan addressed the crowd and said, “Fuck Donald Trump!” The crowd cheered and it was funny because Ryan just blurted it out of nowhere. The night sky hit while the rain continued to pour on the lawn. I felt bad for those people wearing yellow coats. They were probably drunk like the rest of the crowd anyway. The guy in front of me had a long beard and didn’t show any emotion towards the show whatsoever. He just kept taking pictures and didn’t move. Like come on and just have fun dude!

The past few years have been interesting for Ryan Adams. He released the self-titled LP which brought him back to rock and roll and playing full band shows instead of just acoustic. All of us fans breathed a collective sigh because in my opinion this is the music I want to go see. The acoustic is cool but give me some loud amp version from 1984 and it’s on! He covered 1989 and it got some great reviews, but of course there is always the criticism. You aren’t being honest with yourself if you don’t feel something when you hear his version of “Bad Blood”. And now his latest release continues on the trend of the straight forward rock, which is fucking great. Oh, and he got divorced to Mandy Moore which sounded like it got kind of messy. Well, at least there is new material! So, it was great to see Ryan again, and I’ve noticed that he’s having more fun onstage. He laughs and jams out and there is just this calmness that wasn’t there before.

A surprising moment came when he played “Dear John”. I could hear people saying wow and how he hadn’t played this live-in years. The recording features Norah Jones. So of course, I yelled for Norah to come out. Just once or twice and then I enjoyed the tune. I know, I know. Yes, I did yell a lot during the show. But it’s out of full blooded rock and roll passion that courses through my veins. I can’t help that music moves me in ways and helps me see the world and my own life in different ways. Think deep man. You know what I’m talking about right? This is our scene. Thousands of fans joining together and uniting for these anthems that have defined different parts of our lives. You respect it and its part of you. Breathe that air in, in this case it was chilly air on subpar cold May night, but damn it was worth it.

The show ended with Ryan telling the crowd, “We only have three minutes left. I wish we could play more,” as the fans cheered loudly. “Thank you guys so much. We love you.” The place grew quiet as Ryan stood near the end of the stage with his acoustic guitar and blew into his harmonica, beginning the familiar chords of “Come Pick Me Up”. I immediately got out my phone. I’m not sure why. I have seen him play this song so many times. At this point I was savoring the last song and my beer was empty so I had an extra hand to film it too. The crowd sang along to the chorus as Jenny Lewis walked out onto the stage for an even bigger ovation. The two veteran songwriters leaned close to the microphone and sang the words that we all know. I kept filming on my phone but didn’t sing because I was too in awe of the moment. The song ended as people clapped for more. The house lights came on, which signaled the end of the show as the music played over the pa system. Me and Dustin walked to the merch booth and stood under it as the rain poured. Dustin called for an uber while I stared out into the rain illuminated by the lights on the lawn as fans left the venue. The group of college kids walked past me and I heard them talking about how amazing the show was. I smiled, knowing that they would be back to keep the spirit of rock and roll alive.

For the latest in updates visit